Hot on the heels of Maleficent and Cinderella, Disney have continued their plan to give all of their classic animations a shiny new live action reboot with Jon Favreau’s visually spectacular The Jungle Book. Though in this instance, the line between live action and animation is blurred considering the entire film, other than young newcomer Neel Sethi as the film’s heroic man cub Mowgli, is rendered in photorealistic CGI.

If you’ve seen the animated film or read Rudyard Kipling’s original novel, you know the story already. In the Indian jungle, young Mowgli is raised by wolves after being orphaned at a young age, living with the pack as one of their own. His mother Raksha (Lupita Nyongo’o) and father Akela (Giancarlo Esposito) begin to fear for his safety when Shere Khan (Idris Elba), a sinister tiger with a chip on his shoulder, promises to kill Mowgli as soon as the current water truce is over.

For the good of the pack, Mowgli leaves with the panther Bagheera (Ben Kingsley, who provides the right levels of nobility and authority), who will lead him to the man village and out of Shere Khan’s reach. Along the way, he gets into various scrapes and meets a host of other animals, some friendly – like loveable sloth bear Baloo (Bill Murray, an absolute delight) – and some not-so friendly – like King Louie (Christopher Walken), a giant prehistoric ape who lurks in the shadows like an old school gangster.

All of these animals – and the world they inhabit – are generated entirely in a computer to at times startlingly realistic effect. It takes a while for the eye to adjust to these photorealistic creatures that, although they are wonderfully rendered and animated, still can’t quite cross the uncanny valley. Creating animals as perfectly as these is undeniably impressive though and Favreau and his effects team don’t have them do anything that these animals couldn’t physically do. Even when they talk, their faces behave how an animal’s face would conceivably behave rather than making exaggerated, anthropomorphic gestures.

That clinical, photorealistic look is perhaps more distracting than a more stylised look might have been but the film is otherwise so absorbing and entertaining that it’s easy to get swept up in it. Favreau has shown with the first two Iron Man films that he’s a safe pair of hands for a blockbuster of this scale and he once again shows why. His lightness of touch and excellent management of tone and pacing fits this material perfectly, balancing adventurous action scenes, jovial comic relief and – thanks to Shere Khan – a good helping of what’s typically referred to as ‘threat’ when it comes to PG movies. Disney haven’t shied away from having genuinely frightening villains in the past – think Scar in The Lion King, for example – and Shere Khan continues that tradition, no doubt occupying the nightmares of a new generation of kids.

Where the film doesn’t entirely hang together is in its use of the songs from the animated version that have become so iconic. This version isn’t a musical by any means but, perhaps due to audience expectations or studio requirements, lands in a weird halfway house of including two songs, with one of them performed as a full-on musical number. When Baloo and Mowgli sing the Bear Necessities as they drift down a river, it feels fairly organic and works as a welcome nod to the previous film. However, when everyone stops to watch King Louie break out an extended performance of I Wanna Be Like You, it feels bizarre and out of place, even if Walken’s performance of it is hugely enjoyable.

While Walken, Murray and co are all fantastic, performing opposite an entirely animated cast is a challenge for any actor so it’s understandable that newcomer Neel Sethi, in his first screen role, delivers a performance that’s not bad per se but certainly a mixed bag. Physically, he looks almost identical to his cartoon counterpart and is completely believable during the action scenes but when it comes to dialogue scenes, his line readings are often flat and he doesn’t entirely sell the emotional side of Mowgli’s arc.

Despite an uneven lead performance, The Jungle Book is a witty, charming and engaging adventure that moves at a rollicking pace through a stunningly rendered world. It’s a credit to Favreau and the tech whizzes who helped craft this film that it isn’t engulfed by the considerable shadow of the beloved original; instead it carves out its own place as a wonderful family film for a whole new generation. 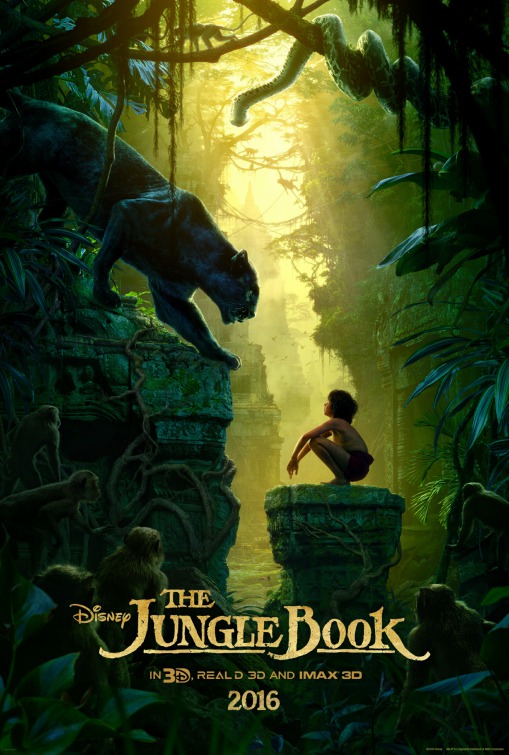