Popular 60’s TV show The Man from U.N.C.L.E gets a big screen reboot courtesy of director Guy Ritchie and aimed at an audience who aren’t going to remember the show, let alone the Cold War that provides the backdrop for this fluffy spy caper. This occasionally fun but curiously dull spy pastiche seems stuck somewhere in between the stylised action of this year’s Kingsmen and the suave quippery of old-school Bond, but neither the set-pieces nor the gags register enough to keep this film entertaining throughout.

As in the TV series, the plot involves the unlikely pairing of a smooth CIA agent Napoleon Solo and his rough-and-tumble KGB counterpart Illya Kuryakin, with Henry Cavill and Armie Hammer stepping in for Robert Vaughn and David McCallum respectively. After a lively opening chase scene that sees Solo rescue beautiful German mechanic Gaby (Alicia Vikander) from the clutches of Kuryakin. Both men’s respective agencies want to get their hands on Gaby to get to her father, a Nazi rocket scientist working on a nuclear bomb for slinky Italian socialite Victoria (Elizabeth Debicki).

Gaby becomes part of the mission, posing as Kuryakin’s fiancé in order to get the Russian closer to her uncle and subsequently her father. Meanwhile, Solo cosies up to Victoria, who seems to know more about what’s going on than she lets on. The plot is standard espionage fare with double-crosses and triple-crosses and gadgets and fast cars and all of that stuff, all in search of a MacGuffin. The actual intricacies of the plot don’t particularly matter; this is purely style over substance and Ritchie revels in the slick retro setting but the film is lacking the kind of fizz that made the likes of Lock, Stock and Two Smoking Barrells and Snatch so much fun.

Ritchie’s sure hand with the action is appreciated – it never sets the pulse racing but it’s always clear what’s going on – and there are moments of visual wit, particularly the sight of Solo tucking into a sandwich and glass of wine while his comrade can be seen in the background, struggling to escape some baddies on a speedboat. It’s the type of scene that’s all too infrequent in a film that’s strangely lifeless despite everything that’s going on.

Part of that could do with the casting and lack of chemistry between the film’s stars. Cavill’s a stiff in general and – though he looks the part – he struggles to muster up Solo’s sophisticated charms. He also doesn’t appear to share any chemistry with Hammer which leaves most of the scenes where they’re supposed to bounce off each other feeling flat. Hammer for his part gives a good go at making Kuryakin a more troubled, tempestuous hero and his soft spot for Gaby provides some of the film’s better scenes.

Outshining their male counterparts are Vikander and Debicki, both on something of a roll after strong performances in the likes of Ex Machina and The Great Gatsby respectively. The two ladies have the charisma and magnetism that the male leads are sorely lacking, particularly Debicki who’s deliciously devious performance gives the film a welcome shot in the arm whenever she’s on screen.

Ultimately, The Man from U.N.C.L.E is an exercise in style over substance that’s lavishly produced but lacking in any real spark, particularly between the two miscast leads. Hugh Grant crops up late in the film, injecting a bit of life into proceedings but his involvement this time around amounts to nothing more than set-up for a sequel that – on the evidence of this sadly lifeless effort – will likely never happen. 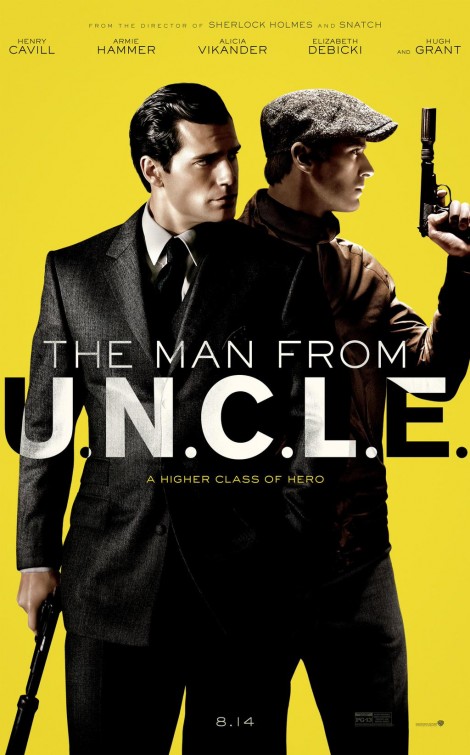