The Martian, released only a few weeks before his 78th birthday, is a triumphant return to form for Ridley Scott, a once beloved veteran who delivered sci-fi classics Alien and Blade Runner before, recently, sinking into a late-career slump patchy enough to suggest his best days were behind him. But Scott has shown over the years that he is a capable director and a wonderful visual stylist who, with the right script, can make a great film.

Drew Goddard’s script for The Martian, adapted from Andy Weir’s novel, is a million miles away from the ponderous philosophical musings of recent Scott flicks The Counselor and Prometheus and as such Scott’s film is a lively and engaging as anything he has done, anchored by a charismatic lead turn from Matt Damon as stranded astronaut Mark Watney.

When a storm on Mars leaves Watney stranded and presumed dead, he must overcome the obvious issues of being stuck on an alien planet indefinitely, using his smarts and never-ending optimism to work out a way to grow food and make contact with Earth. There are no villains here, no aliens and no existential soul searching, nor is Watney overcoming a traumatic past or missing his children grow up; this is just a story of problem solving, a tribute to intelligence and perseverance and Damon makes for great company.

The actor is at his most charming here, spending the majority of the film alone, with only old episodes of Happy Days and a disco playlist to keep him company. Through a series of upbeat, irreverent video logs, we follow Watney as he solves his food problem – growing potatoes with the aid of some vacuum packed human waste – and tries to figure out a way to communicate with NASA. It’s endlessly fascinating watching Watney potter around the base and the film manages to convey the science of everything he’s doing in a way that at least sounds plausible, even when it isn’t.

Intercut with Watney’s travails on the red planet is the fallout on Earth, where NASA – including Jeff Daniels’ director, Kristen Wiig’s PR guru and Chiwetel Ejiofor’s Mars expert – has to break the news of Watney’s assumed death and eventually explain that he’s alive and they left him out there. Most of the NASA scenes play out like an Aaron Sorkin workplace drama as people in the know race from one crisis meeting to another, throwing around sharp one-liners as they brainstorm a way to get out of this mess and get Watney home safely. It’s striking that again, no-one here is a bad guy. There are no corporate bigwigs trying to sweep this under the carpet or any underhanded politics going on. In a lesser film, Daniels’ character Teddy would be the hardass but here his decisions, even the unpopular ones, are all motivated by what’s going to be best for everyone involved.

The one character that doesn’t quite work in these portions of the movie is Rich Purnell, an analyst played by Donald Glover. While Glover’s performance is fine, the character feels like a lazy trope – the scruffy, nerdy genius with no social skills – in a film mainly populated by well-drawn characters. That said, when we are reintroduced to the rest of Watney’s crew in the third act, there’s a sense that none of them have much beyond their one defining character trait but the actors are all so likeable that they paper over those cracks. Jessica Chastain’s captain is joined by Michael Pena, Kata Mara, Sebastian Stan and Aksel Hennie who – combined with Damon and the actors in the NASA scenes – make up one hell of an ensemble.

Though its runtime does start to sag and some of the running jokes maybe aren’t as funny as Goddard seems to think they are – Watney doesn’t like disco, we get it! – The Martian is an entertaining and wonderfully hopeful film. So often science fiction is dour and concerned with huge, existential themes but this film is more about the power of teamwork and problem solving, about humanity pushing itself to its limits and, to paraphrase Watney, science-ing the shit out of stuff. 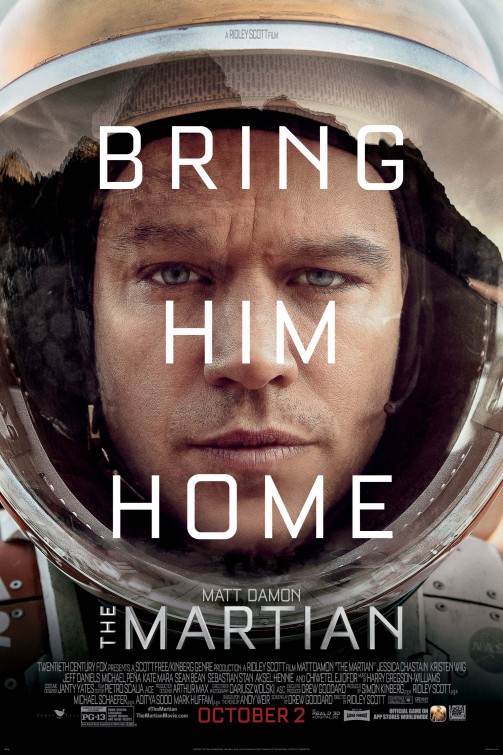