T’was the night before Christmas and for best buds Ethan (Joseph Gordon-Levitt), Isaac (Seth Rogen) and Chris (Anthony Mackie), that means it’s time to hit the town to get drunk, get high and relive wild Christmases gone by in Jonathan Levine’s raucous and heartfelt festive comedy The Night Before. As to be expected from the director and stars of 50/50, the film mixes bro-humour and real feels, with some Christmas spirit thrown in this time around.

The Christmas Eve party tradition started years ago when Ethan was orphaned after his father’s death. Isaac and Chris took him out for a night of drink, drugs, Big-style giant pianos and elaborate karaoke. Now the guys are in their thirties and adulthood is kicking in, with Isaac expecting his first child and Chris’ football career finally taking off, so they’ve decided this Christmas is their big farewell to their old tradition.

This doesn’t sit too well with Ethan, whose life isn’t quite going to plan: he’s stuck working odd jobs until his music career takes off and his lack of direction has turned off ex-girlfriend Diana (Lizzy Caplan). With this Christmas to be their last together, Ethan is determined to make it count and steals tickets to a mythical, super-exclusive party called The Nutcracker Ball that the trio have been desperate to go to for years.

Armed with a box of drugs, a Red Bull-sponsored stretch hummer and three particularly naff Christmas jumpers, the guys set out to live it up one last time. What follows is a rambling, improv-heavy and often hilarious bro-comedy that follows the three leads through the streets of New York as they get into wacky adventures, accompanied by a cavalcade of mostly well-placed cameos from the likes of Ilana Glazer, Mindy Kaling, Miley Cyrus and Michael Shannon, who pretty much walks off with the whole movie as mystical pot-dealer Mr Green. “My quiet intensity makes most people uncomfortable”, he drawls at one point, in a wonderfully self-referential moment.

Some of the side-plots and set-pieces don’t entirely pay off – Glazer is good but her appearance doesn’t really go anywhere – but when the jokes land, they really land. Of the central trio of actors – who have an easy-going chemistry and plenty of good banter – it’s Rogen who shines the most, delivering his funniest performance since his breakout role in The 40 Year Old Virgin. After ingesting far too many mushrooms and unsuccessfully trying to balance it out with coke and weed, he ends up a sweaty, paranoid wreck, frantically venting his fear of impending parenthood into his iPhone camera and getting increasingly confused when he starts to receive a series of dick pics.

Unlike many of its contemporaries in the post-Apatow age of comedy, The Night Before manages to find a way of including the heart and the drama without sacrificing too much of the humour or slowing it down to make room for it all. There is a sense towards the end that Levine and his co-screenwriters have tried too hard to wrap everything up a little too neatly, providing a series of endings where just one would’ve been fine.

For fans of this kind of raunchy, adult humour, The Night Before could become a regular fixture around the festive season, providing a good deal of holiday spirit with an impressive ratio of very funny gags along the way. 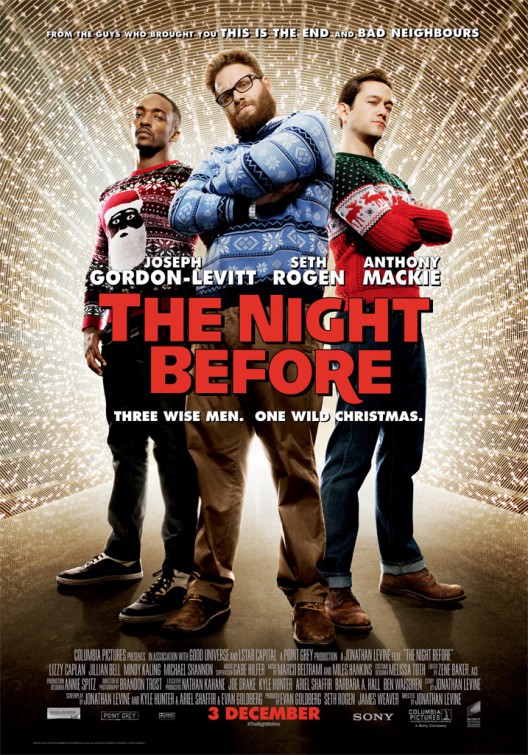