Eleven years since the last time he directed a film that didn’t quickly become a punchline, former directorial wunderkind M. Night Shyamalan seems to be somewhat on the comeback trail with The Visit. Teaming up with Jason Blum – the scarily prolific producer of low-budget/high-profit genre fare like Paranormal Acitivity, Insidious, Sinister, The Purge and so many more – Shyamalan has somewhat gone back to basics, making a smaller film less weighed down by pretension and misguided ambition.

After a bitter fall out over her new husband, Paula (Kathryn Hahn) hasn’t spoken to her parents in years. In the meantime, the husband has bolted, leaving her with two kids: teenager Becca (Olivia DeJonge) and preteen Tyler (Ed Oxenbould). On the eve of a honeymoon with her new husband, Paula sends the kids to go live with the grandparents they have never met on a secluded Pennsylvania farm. What could go wrong?

Pop Pop (Peter McRobbie) and Nana (Deanna Dunagan) seem nice enough but some of their old people habits start to freak out the kids, like Pop Pop’s incontinence and Nana’s extreme sleep walking and night vomiting…you know, the usual. Nonetheless, Becca presses on with the documentary she’s making for her mother, an ambitious attempt to get to the bottom of the fall out that tore the family apart and provide her mother with an emotional elixir.

As always, the found footage gimmick – though it isn’t really ‘found’ this time around – begs the question: why bother? Nonetheless, Shyamalan and cinematographer Maryse Alberti make this one of the best looking found footage efforts around, crafting some striking shots despite the limitations of the style. They also utilise the multiple cameras – Tyler and Becca have one each – for some quicker cuts in certain scenes that adds to the terror. At times it feels like Shyamalan is playing James Wan’s game more than his own but he has a pretty good stab at it.

On the surface, The Visit actually hews closer to Blum’s previous output than Shyamalan’s, with its found footage gimmick and largely unknown cast. But while the found footage trappings prevent Shyamalan from having the same kind of control over the frame that he utilised so brilliantly in something like The Sixth Sense, his fingerprints are all over the film, for better or worse. Hahn’s single mother character and the emotional baggage she’s carrying is reminiscent of Toni Collette’s character in The Sixth Sense and Shyamalan not too subtly explores familiar themes: family, grief, making peace with someone before it’s too late.

On the downside, the decision to make Becca a pretentious, aspiring documentarian and Tyler a seriously awful rapper almost sinks the film, especially early on. The actors’ performances are fine and as the film goes on they have more to work with – their father’s abandonment has left some scars – but these irritating affectations just feel bafflingly out of touch and out of place; Tyler’s insistence on replacing curse words with female pop singers’ names feels like a joke rejected from a 90’s sitcom.

The Visit can’t really be considered an outright return to form for Shyamalan but it’s a step in the right direction: an effective thriller that’s more solid than really remarkable. That something just above average like this is considered a huge improvement speaks volumes about where Shyamalan’s reputation is at the moment but this has at least broken the run of outright duds and served as a reminder that Shyamalan is a very skilled filmmaker. 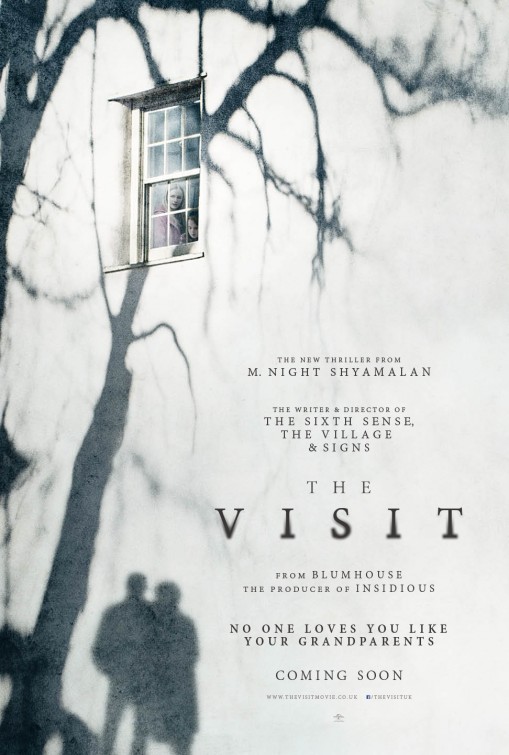