The Walk tells the true story of French high-wire artist Phillippe Petit and his incredible walk on a tightrope between the twin towers of the World Trade Centre in New York back in 1974. If the story sounds familiar, that’s because Petit was the subject of James Marsh’s documentary Man on Wire, a fascinating, Oscar-winning film that hit at the heart of Petit and his single-minded quest to achieve something as glorious as his death-defying walk.

The Walk, as directed by Robert Zemeckis, doesn’t seem to be as interested in the whys and wherefores of Petit’s journey or very much about his character at all. The entire film feels like an excuse for Zemeckis to apply his knack for visual effects to rendering the titular walk in all its 3D, vertigo-inducing glory, and to his credit he’s mostly successful in that respect. The film’s finale is an undoubtedly visceral experience, achieving the one thing Man on Wire couldn’t do in putting the audience right up there in the heavens with Petit as he walks back and forth across his wire, 110 stories off the ground with befuddled police officers waiting for him on either side.

However, as with the rest of the film, this scene is let down by a clunky, intrusive narration that is spread throughout the film. The film opens with Petit, played by Joseph Gordon-Levitt with an iffy wig and an even iffier French accent, standing on the Statue of Liberty and he proceeds to talk us through absolutely everything that’s happening which, considering we can see it, feels redundant. How much more powerful would this scene have been if it were quieter and we could just take in the sensational feat that Petit achieved?

Perhaps Zemeckis is trying to keep reminding everyone that this is a true story which, considering how phony the rest of the film feels, would be easy to forget. The bizarrely glossy aesthetic gives everything an artificial sheen, recalling the director’s experiments with mocap The Polar Express and Beowulf. The cartoonish archetypes that fill in as supporting characters – shout out to Ben Kingsley, donning another terrible accent – feel like they’ve been transplanted from a particularly lazy kid’s movie.

Even Gordon-Levitt doesn’t look entirely real, with any attempts to make him more like the real Petit – the aforementioned wig, icy blue eyes – just making him less believable as a living, breathing character. Aside from the obvious issue of him having to wrestle with a French accent which, admittedly, he at least commits to, Gordon-Levitt is well cast, putting his impish charm to good use. It ultimately feels surface level though with neither the performance nor the script really finding anything beneath Petit’s outward showmanship.

There’s no real exploration of what’s driving Petit to undertake such an incredible feat of death defying performance art and the sharper edges of his character are shaved off, making him a more traditional hero. Sure, there are minor fallouts with his circus mentor Papa Rudy (Kingsley) and girlfriend Annie (Charlotte Le Bon, the only actor to find any subtlety in her performance) but by the end everyone has kissed and made up, and Petit’s exploits once he found fame totally glossed over.

The combination of Zemeckis’ technical mastery and this genuinely thrilling story should’ve been perfect but the director has missed a slam dunk, surrounding one of his biggest cinematic achievements in cliché, banality and jarring artifice. The only moment that feels genuine – and isn’t drowned in voiceover – is the acknowledgement of the fate of Petit’s beloved towers, which the film inevitably had to do and does so with a subtlety and class sadly lacking elsewhere. 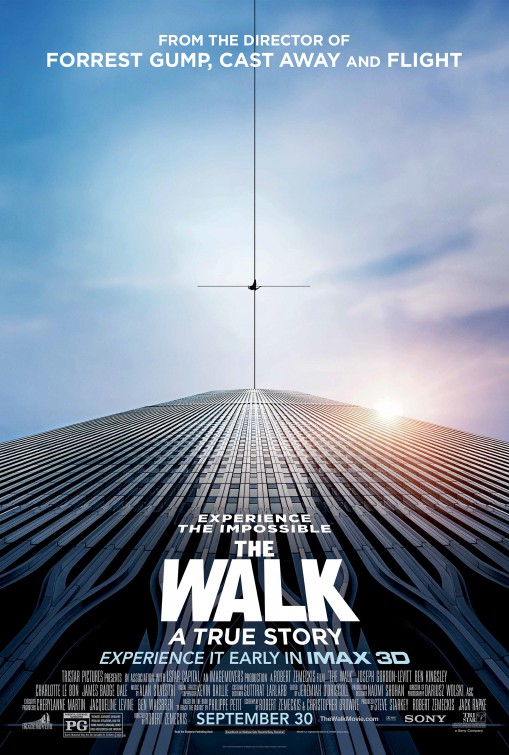