Much like Shaun of the Dead aped zombie films and Hot Fuzz paid homage to American cop flicks, The World’s End – the third in Edgar Wright’s ‘Three Flavours Cornetto’ trilogy – puts a comedy slant on the sci-fi genre, adding to the growing list of cinematic apocalypses hitting cinemas this year. As well as laughs, Wright and his frequent collaborators Simon Pegg and Nick Frost bring some poignancy to the table this time around, looking at the pitfalls of trying to recapture your past while also casting a satirical eye on the homogenisation of modern Britain.

Pegg plays Gary King, a wonderful tragi-comic creation, who was the life of the party in high school but has done nothing with his life since. He still sports the same leather trenchcoat and Sisters of Mercy t-shirt that he did when he was 19, his hair thinning but still slicked back in the same style. Pegg has successfully coasted on his loveable comedic persona in blockbuster franchises for a number of years now, with some lesser seen comedies in between, but Gary King is more of a stretch for Pegg. He is as funny as ever but there’s an underlying melancholy to his portrayal of a man tragically trapped in the past that makes this Pegg’s best performance.

Given that Gary is such an obnoxious man-child, it’s no wonder his old school pals are less than enthusiastic when he tries to bring them all back to their sleepy hometown of Newton Haven to have another bash at a legendary 12-stop pub-crawl that they attempted back in their school days, failing miserably.

Mostly out of pity, the gang leave their comfortable lives to meet up with Gary for a few pints, none of them really planning to stick around for the whole pub crawl. Each of Gary’s friends are brilliantly played by some of Britain’s finest: Martin Freeman is estate agent Oliver, glued to his Bluetooth earpiece; Eddie Marsan is Peter, a meek salesman working in his dad’s car showroom; Paddy Considine is Steven, a recent divorcee who is quick to tell everyone he’s seeing a 26-year-old personal trainer; and finally there’s Nick Frost as Andy, a lawyer who has a major chip on his shoulder regarding Gary after a mysterious accident in their past.

All of these performances are a lot of fun, whether it is Freeman’s comic reaction shots, Considine’s deadpan one-liners or Marsan’s gleeful moments of immaturity. Andy has the biggest arc of these characters and as such, Frost has to wait a while for his angry, tee-totaller to down a few shots and get stuck into the action.

And there’s plenty of action, as the guys soon discover that Newton Haven isn’t the same town they left all those years ago, with most of the locals – spoiler – having been taken over by alien robots. With each stop on the crawl, they come a little closer to finding out the truth behind the creepy aliens that are inhabiting their local pubs and dispatch more and more blue-blooded body snatchers in some impressively choreographed fight scenes.

After his American excursion – 2010’s excellent comic book/video game mashup Scott Pilgrim vs. The World – Wright is firmly back on British territory and through the alien-induced uniformity that has taken over Newton Haven, he takes a tongue-in-cheek dig at what Steven calls ‘Starbucking’, with every local pub or eatery being taken over by a big corporate chain.

Not that The World’s End is some hardcore message movie. Rather than hammer on that theme – it’s obvious but not overpowering – Wright seamlessly weaves it into the action, comedy and surprising levels of poignancy as the rest of the gang begin to realise just how damaged Gary really is.

Despite its genre thrills and spills and deeper themes, The World’s End is still a comedy first and foremost and certainly delivers a variety of gags, from inspired wordplay to perfectly judged physical comedy, with a smattering of running jokes thrown in for the Cornetto enthusiasts. It’s laugh quotient might not be as consistent as the other films in the very loose trilogy – or indeed this year’s other doomsday chuckler This Is the End – but The World’s End offers a lot more to go along with its laughs, making for a well-rounded and satisfying conclusion to Wright’s series of Britcoms. 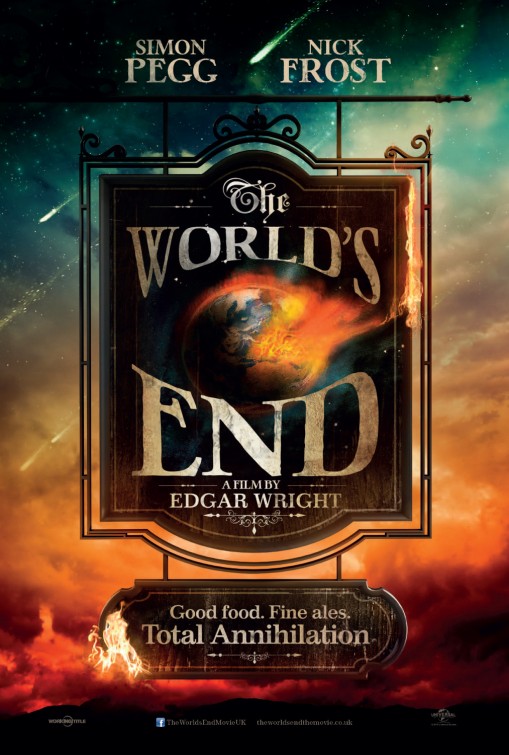