This may be a hot take, but the Marvel Cinematic Universe – the ongoing/never-ending series of interconnected films featuring the likes of Iron Man, Captain America, Thor and the Hulk – is at its best when it’s funny. The series has always had a strong strain of comedy throughout but in recent years, Marvel have leaned into it more, producing overtly comedic films like Guardians of the Galaxy, Ant-Man and even this year’s Spider-Man: Homecoming. Thor: Ragnarok, the latest instalment in the series, is almost an out-and-out comedy, with What We Do in the Shadows director Taika Waititi bringing his unique comic voice to the film.

Waititi’s particular brand of offbeat New Zealand humour is a welcome breath of fresh air for the Thor sub-franchise, which was still reeling from 2014’s average-at-best Thor: The Dark World. His humour is a perfect fit for this world and in particular Thor himself, the arrogant God of Thunder played by surprisingly skilled comedian Chris Hemsworth. Hemsworth has always been funny in this movie and here he’s lighter and looser than ever, delivering easily his best performance as the character. Waititi and the screenwriters, Eric Pearson, Craig Kyle and Christopher Yost, wisely give him multiple characters to bounce off, with fellow Avenger Bruce Banner aka The Hulk – played again by Mark Ruffalo – providing a particularly good comedic foil.

The two wind up together when Thor finds himself captured and taken to Sakaar, a pleasure planet run by the eccentric Grandmaster, played by the eccentric Jeff Goldblum. The bulk of the film takes place on Sakaar and is essentially a caper that sees Thor trying to enlist the Hulk, Loki (Tom Hiddleston) and Valkyrie – a former Asgardian warrior turned drunk, played by Tessa Thompson – to help him escape. He has to get back to Asgard to stop Hela (Cate Blanchett), Thor and Loki’s estranged, extremely powerful sister who was banished long ago. Now she’s back and, along with her army of the dead, has taken over Asgard, and has some pretty ruthless expansion plans.

With Marvel films, the first 90 minutes – before the fighting and explosions kick in in earnest – are always the most enjoyable. Here, they are an absolute blast, finding humour through cleverly crafted set pieces, inspired slapstick and sharp character moments alike. Waititi zeroes in on the insecurities of these overpowered super beings and relishes the chance to bring them together and watch them bicker and banter back and forth. The best material comes from the buddy dynamic between Hemsworth and Ruffalo, who are given some of their best material as these characters and provide a compelling central pairing.

But Hemsworth also shares a spiky chemistry with Thompson, whose tough, playful Valkyrie is no doubt destined to be a love interest in the near future. Perhaps the biggest laughs however come from Waititi himself, voicing a dimly sweet rock creature named Korg with that well-honed Kiwi deadpan. It’s a pity that Cate Blanchett’s Hela is largely excluded from all of the fun, with the haughty goth character seemingly ripe for a deliciously campy turn that sadly never takes off.

Hela’s scenes are actually where the film’s overtly comedic tone starts to come undone. When we have to get back to the serious matter of Hela wiping out hundreds or thousands of Asgardians and potentially destroying an entire realm, the jokes begin to feel out place. These are huge stakes that are typical of the MCU but don’t mesh all that well with the knockabout tone of the rest of the film, and Waititi doesn’t quite manage the balance of laughs and genuine drama. Where Guardians of the Galaxy can flip from rapid-fire jokes to tear-jerking drama with ease, Thor: Ragnarok has a tendency to undercut gravely serious moments with another gag. It’s unfortunate that, even though Waititi has largely been let off the leash and his idiosyncratic voice is all over the film, it ultimately has to segue into a typically bombastic and overlong finale.

Until that point though, Thor: Ragnarok is one of Marvel’s most purely enjoyable films to date, combining colourful, heavy-metal album cover visuals with Waititi’s idiosyncratic sense of humour. It also feels like a real jump forward for the Thor series, tying up the dull, predictable loose ends of the last film and throwing these characters out into a whole new world. With Avengers: Infinity War on the horizon, we will see Thor and his buddies very soon but- after this film – it’s Thor’s next solo outing that carries the real potential. 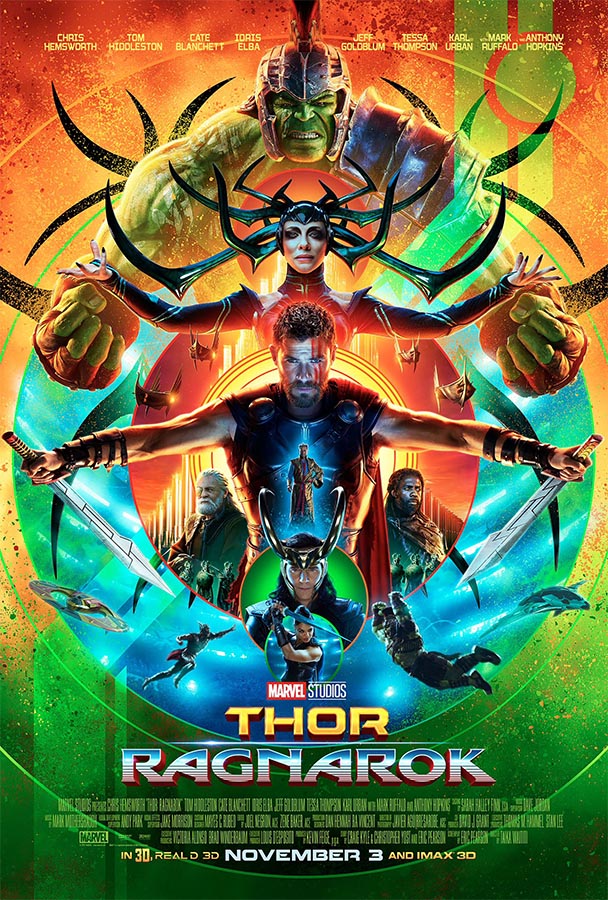