Forced from retirement during the Cold War, MI6 veteran George Smiley (Gary Oldman) is forced with the task of unearthing a Soviet mole at the very top of the secret service.

For a story so quintessentially British, Swede director Tomas Alfredson might not have been the obvious choice to direct but he certainly proves here that he is the perfect choice, bringing with him a real flair for suspense and gloom that he honed on his superb Swedish vampire drama Let The Right One In. Adapted from John le Carre’s 1974 novel, already made into a beloved BBC miniseries in 1979, the material may not be entirely fresh but Alfredson delivers a new take on it, dialling everything back and adding in one key sequence, flashbacks to an office Christmas party that emphasises one of the films key themes: betrayal.

When Prideaux’s mission goes awry, George Smiley is brought out of retirement to find the traitor within the Circus and enlists inside man Peter Guillam (Benedict Cumberbatch) as his right hand man to help secure private documents from within the Circus, providing one of the film’s most thrilling scenes.

Another pivotal player in all of this is Ricki Tarr (Tom Hardy), who’s key scene features him giving Smiley the details of his time in Istanbul via a series of gripping flashbacks. Sent there to follow a military attaché, Tarr falls in love with the man’s wife Irena and discovers she may have more information to offer than the attaché himself. We see in another flashback later in the film the fate that befalls Irena, unbeknownst to Tarr, who seeks a vital promise from Smiley in exchange for information. Smiley’s response is an indicator that no-one in this tangled web of deceit and betrayal can be trusted, not even the supposed hero.

The aforementioned Christmas party scene is a welcome addition to the story. Intercut with the main storyline, the party shows everyone before the film’s events come into play, bringing light to some key dynamics such as revealing one characters affair with Smiley’s wife and a superb, subtle piece of acting from Firth and Strong.

Far from the gentleman’s club atmosphere of the original TV series, the Circus created here is a dark, shadowy place filled with men concealing so many secrets, from national intelligence to infidelity to closeted homosexuality; it weighs heavily on their faces. This atmosphere permeates the whole film as Alfredson allows everything to play out in a truly slow-burn fashion, signposting nothing for the audience and allowing this dense story to play out at a leisurely pace. The early scenes are very slow and require the utmost attention to stick with the characters and covert goings on but that patience is suitably rewarded once the film slowly rolls into gear.

The film completely avoids the flashy action and pulse racing chases of espionage staples such as Bond, Bourne or Mission: Impossible, instead favouring a much colder approach, all repressed men in drab clothes having hushed conversations, set in dimly lit, grey and brown rooms. Nowhere is this chilly approach more evident than in Gary Oldman’s superb portrayal of Smiley. Oldman delivers a masterclass in subtle underplaying, rarely speaking but telling all you need to know with his face, less loveable than Guiness’ take on the character, this Smiley has an air of stillness that feels vaguely sinister.

The rest of the cast is uniformly superb with Cumberbatch impressing in his first substantial movie role after TV’s Sherlock Holmes, Firth adding another strong performance to his recently superb CV and, perhaps finest of all, Mark Strong delivers a career best performance as the field agent turned school teacher Jim Prideaux. Even small parts are filled by brilliant British actors including Kathy Burke (star of Oldman’s Nil By Mouth) and Boardwalk Empire’s Stephen Graham, both in small but pivotal parts.

Slow burning, intelligent and brilliantly acted, Alfredson’s Tinker Tailor Soldier Spy is a fascinating spy drama that faithfully adapts le Carre’s novel, capturing the tone perfectly. If the film has one drawback, it’s that it sticks to it’s underplaying style to the point that the big reveal of the mole seems slightly anticlimactic and perhaps could’ve been played up a bit more. Oldman’s performance is a shue in for his first Oscar nomination and it’s likely the film will be a heavy hitter itself come awards season. Comfortably 2011’s best film so far. 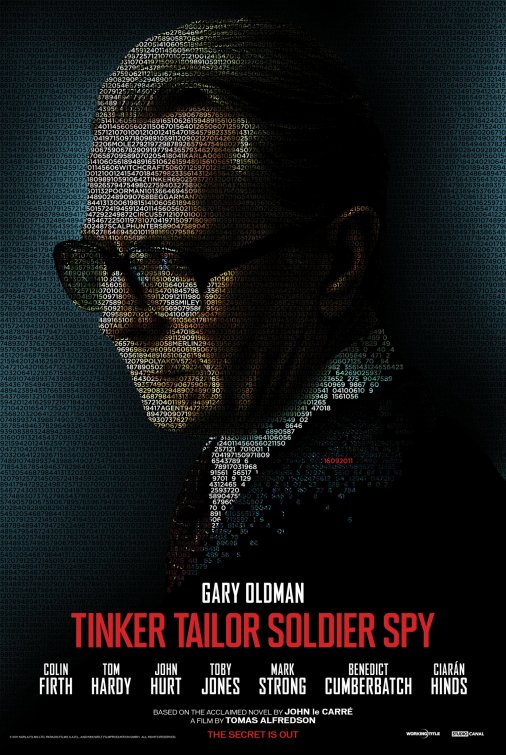