After winning an Oscar for scripting last year’s delightful Midnight in Paris, Woody Allen shifts his attention from the City of Lights to the Eternal City with To Rome With Love, a fluffy comedy with an all-star cast that follows the lives of both tourists and residents in four mostly separate stories over a few weeks in Rome.

Though the film is episodic and the different sections are separate, they run together and mostly compliment each other well despite the varying tones. The most serious and weighty material comes from John (Alec Baldwin) relating the mistakes of his past to Jack (Jesse Eisenberg), a seemingly younger version of himself who is on the brink of cheating on his loving girlfriend Sally (Greta Gerwig) with her best friend Monica (Ellen Page). Baldwin is perfect in the sardonic mentor role, invisible to everyone but Jack, he hovers in every scene and is quick to point out what we can all see going on between Monica and Jack. It’s a story deserving of its own film which might have even afforded Gerwig more time to flesh out Sally who is mostly sidelined in favour of Page’s scatty struggling actress.

The other three stories are far lighter, comedic and often farcical. Firstly there’s Allen himself playing Jerry, a retired opera producer who discovers his daughter’s (Alison Pill) soon-to-be father in law Giancarlo (famous tenor Fabio Armiliato) has an incredible singing voice, but can only perform in one particular and hilarious scenario.

Elsewhere, through a series of farcical misunderstandings, voluptuous call-girl Anna (Penelope Cruz) is forced to pass herself off as the new bride of Antonio (Alessandro Tiberi) to his high society relations while his real wife Milly (the endlessly endearing Alessandra Mastronardi) is lost in the city and being seduced by a sleazy Italian movie star.

Finally, in the film’s most obviously satirical and absurd episode, there’s Leopoldo (Roberto Benigni), an ordinary schmuck who out of nowhere becomes hugely famous and finds the press interested in the most mundane elements of his bland life, from his morning routine to the type of underwear he prefers. (“Boxers, white and loose”). Though Benigni is perfectly cast and there are some big laughs, by the time Leopoldo is surpassed by the next boring schlub the joke has already worn thin and Allen’s comment on reality TV fame couldn’t be any less subtle.

Given the brief time given to each of the stories, the characters never become much more than broad caricatures so it’s down to the game cast to make their mark with the little material they’re given and the actors don’t disappoint. The highlights come from Cruz’s feisty hooker, Baldwin’s sarcastic adviser and a wry turn from Judy Davis as the psychoanalyst wife of Allen’s character.

It may not be classic Woody Allen, there are still flashes of the sharp dialogue Allen the writer has become known for and Allen the actor delivers one of his trademark performances loaded with neuroses and obsessed with his own mortality. In the context of his European tour, Allen’s casual jaunt to Rome falls short of Paris and Barcelona but beats out the director’s London efforts by a long way. 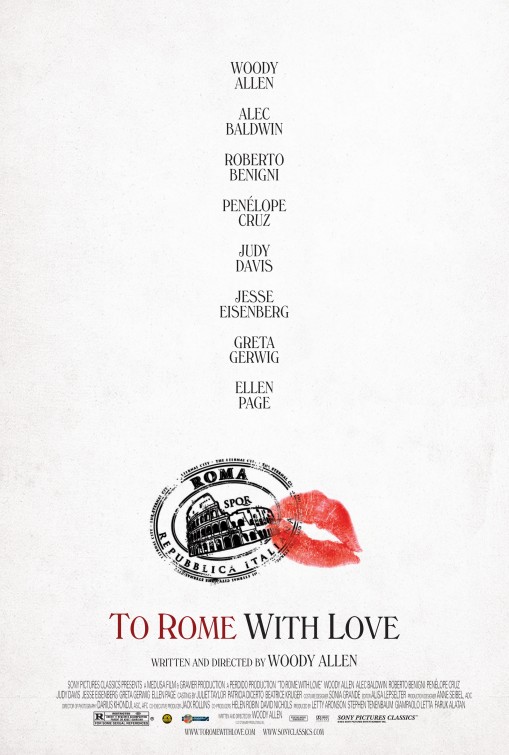