Maren Ade’s delightfully silly and often profound new film Toni Erdmann needs to be seen to be believed. While the prospect of a near-three-hour long German black comedy might be off putting to some, Toni Erdmann’s oddball sense of humour is beguiling right from the off and its insightful depiction of an unusual father-daughter relationship compels throughout.

The father is Winfried (Peter Simonischek), a divorced music teacher and relentless joker. In the film’s opening scene, he turns the mundane act of signing for a parcel into an extended gag, informing the delivery man that the package is for his brother, and that it is in fact a bomb. Later, he attends a family dinner party in ghoulish facepaint, much to the exasperation of his ex-wife and daughter, Ines (Sandra Huller), who have long since had enough of his never-ending pranks.

Ines is her father’s polar opposite. While he’s a shaggy, unkempt trickster, she’s an uptight corporate downsizer, permanently clad in crisp pantsuits with a phone glued to her ear. Ines’ relationship with her family has clearly disintegrated, particularly with her father, who jokes that he’s hired a substitute daughter. When Ines’ job takes her to Bucharest, Winfried decides to visit her out there and what follows is initially a culture clash comedy, an endlessly embarrassing dad humiliating his daughter in front of her high-powered colleagues.

Winfried’s very presence completely throws his daughter off and tensions boil over when he lets her sleep late, causing her to miss an important meeting. She sends him packing but later that night, Winfried reappears in a bar, this time donning a straggly black wig and crooked fake teeth, posing as a life coach named Toni Erdmann and schmoozing with Ines’ friends and eventually her colleagues. He inserts himself into all of his daughter’s social and professional situations, all in the hope of rekindling their relationship and helping Ines rediscover some of her humanity, saving her from the cold and joyless life she is leading.

It’s easy to see why Ines is the way she is when you see how the men around her act towards her and Ade, who also wrote the film, clearly has something to say about casual corporate sexism. The CEO of the company Ines is working for sees no problem with calling her up on the weekend to take his latest wife shopping. Her boss warns her co-worker and lover that they ease up on the sex in case it makes Ines soft, which leads to an explicit and excruciating sex scene between the couple that sees Ines take advantage of one situation where she has complete control, and ensures you will never look at petit fours the same way again.

When Ines finally lets her guard down, the fantastic Huller walks away with the entire film with a painfully funny rendition of Whitney Houston’s The Greatest Love of All at an Easter party. It’s a scene that starts out cringeworthy, shifts into hilarity and eventually leads to a poignant climax, a blend of different tones that Ade deftly handles throughout the film. She mixes the absurdity and silliness of Winfried’s antics with shrewd observations about parent-child relationships and the painful reality of time passed and connections diminished. It captures the melancholy that comes with realising how much you’ve changed and facing the possibility that maybe you don’t like who you have become, but may never be able to go back.

It’s this very specific tone that makes Toni Erdmann such a unique experience and also what the upcoming US remake – which will star Jack Nicholson and Kristen Wiig – will likely struggle to recreate. With a run time that’s almost double most Hollywood comedies (162 minutes), largely deadpan delivery from the actors and a lack of big emotional payoffs, it’s very difficult to imagine any American filmmaker being able to pull this off, which speaks volumes about how special Ade’s film is. 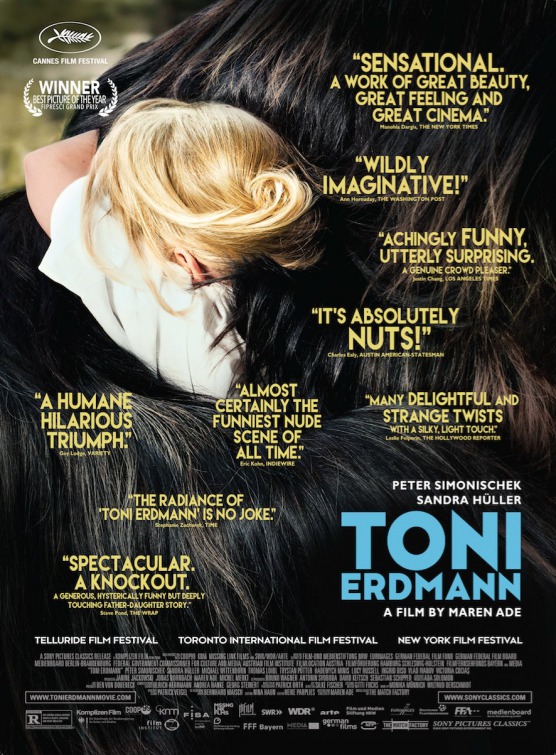