Newly anointed national treasure Danny Boyle gets back to his day job with Trance, a high-concept mind-bending caper that proves the perfect antidote to all of the Olympic hype. It’s a strong reminder that Boyle is first and foremost a filmmaker, and a talented one at that.

The film opens in an art gallery as auctioneer Simon (James McAvoy) gives us a slick run-through of the protocol for dealing with a robbery: secure the priciest piece of art and get it out of there but above all else, don’t be a hero. This set up means there is obviously going to be a robbery and sure enough, on the day the gallery is set to auction a Goya worth £25 million, there is a robbery. Simon follows the protocol to the letter. He grabs the Goya and gets it out of there, only to be met with nasty gangster Franck (Vincent Cassell) who cracks Simon in the head and takes off with what he assumes is the Goya.

Only it isn’t. As Franck soon discovers, he has stolen an empty frame and Simon has hidden the painting somewhere. Problem is, the smack on the head has given Simon a bad case of amnesia and he has no idea where he hid it.

It’s a ridiculous yet intriguing set up. Franck and his goons need Simon to remember where he left it, so after torture doesn’t work, they enlist the help of Elizabeth Lamb (Rosario Dawson), a hypnotherapist chosen seemingly at random who can help unlock Simon’s mind and find the painting.

But everything isn’t as straightforward as that and the plot throws up a lot of active questions that evolve and change throughout. Certain characters seem to know more than you think, and indeed more than other characters think. There appears to be connections that are unexplained and memories that might not be real. As Dr. Lamb gets inside Simon’s mind, the lines between what is real, what is a memory and what is completely fabricated begin to blur into one deliriously confused mash-up of love, sex, violence and betrayal set to Rick Smith’s throbbing techno score.

Trance is a highly ambitious film that is likely to draw comparisons to some of Chris Nolan’s non-Bat movies by way of a 90’s erotic thriller. All the pieces are here for a great thriller: Boyle is on top genre form, the three leads are excellent, Anthony Dod Mantle’s hyper-saturated cinematography is gorgeous…so when it’s all said and done, why does the film feel so flat? The answer lies in the script – from regular collaborator John Hodge and TV writer Joe Ahearne adapting his own work – which just doesn’t quite hang together as well as it should. The story folds back on itself so many times that the gaps in logic begin to get so wide they’re hard to ignore and the complete shift in one character proves jarring and feels like too big a stretch. While there are attempts to add some emotional depth and meaning, they are lost beneath the narrative tricks and visual stylings, leaving it hard to latch onto anything in particular to care about. 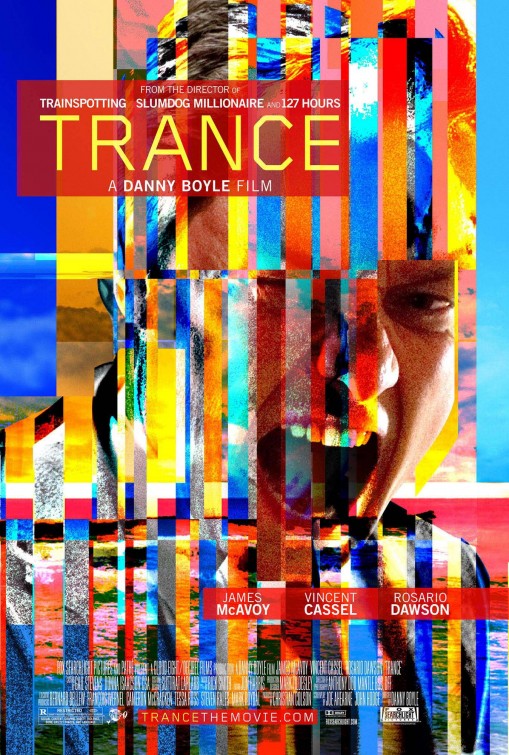