Dating back at least as far as 1980’s Cannibal Holocaust, the found footage angle is nothing new in the horror genre and since The Blair Witch Project made such a huge impression in 1999, it’s a gimmick that’s been milked both in Hollywood and abroad. The latest effort in the sub-genre is André Øvredal’s Troll Hunter, a darkly comic mash up of the faux-documentary and Norwegian fantasy that proves to be one of the year’s most offbeat films.

Whilst investigating a recent spate of bear deaths, student filmmakers Thomas (Glenn Erland Tosterud) and his crew come across the mysterious hunter Hans (Otto Jespersen). Thomas and co trail Hans and quickly discover that it isn’t bears he’s hunting and it isn’t long before the giant Trolls are revealed.

The Trolls are well designed, a monstrous twist on the classic creatures of Scandinavian folklore, all giant noses and multiple heads and well rendered with some solid CGI. The problem is that the movie plays it’s hand far too soon, not allowing for enough build. The early scenes are intriguing, bringing us the brilliantly enigmatic character of Hans but it doesn’t take long for his true profession and the Trolls themselves to be explained to us in far too much detail, the film all too keen to bog down the thrills with a mix of science and mythology. Revealing the Trolls so soon also leaves a saggy middle section before a thrilling ending that plays like a cross between Jurassic Park, Cloverfield and a bizarre nature documentary. These thrills and spills are well crafted but as always the shaky cam effect can start to grate as the film goes on, making the bloated runtime a bit hard to stomach.

Despite its flaws, there’s a lot to enjoy from Troll Hunter. The film never takes itself too seriously, its monster movie thrills and genre conventions are all undercut by a thick layer of black humour, mostly courtesy of Otto Jespersen’s deadpan portrayal of Hans, managing to explain the ridiculous ins and outs of Trolls with a straight face. A Hollywood remake is inevitable but it’s unlikely to match the charm and offbeat humour of this Norse original. 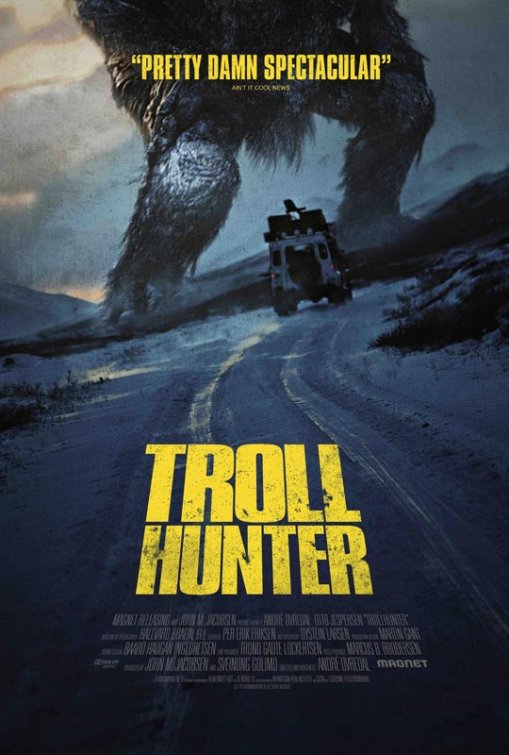