After hooking up on director Ken Scott’s The Delivery Man – the remake of his own French-Canadian hit Starbuck – Scott and star Vince Vaughn are back together again for Unfinished Business, a slightly muddled, overly schmaltzy comedy that gets by on its upbeat tone and just enough genuine laughs.

Vaughn stars as Dan, a family man under financial pressure after he’s let go by his mineral sales company. He starts up his own business with old colleague Tim (Tom Wilkinson) and enthusiastic newbie Mike (Dave Franco), and after a year of toil, using a Dunkin Donuts as an office, the three are close to sealing a deal that would finally kickstart the business.

It would seem that Dan and co are a dead cert for the big deal and think they’re just heading to the meeting to get the all-important handshake and hash out the final details. That is until Dan’s vile former boss Chuck (Sienna Miller) arrives on the scene, undercutting the hapless trio’s prices and taking full advantage of her relationship with the potential buyer’s slimy middle-man Jim (James Marsden).

To try and secure the deal, Dan and the boys fly to Berlin to meet with the corporate bigwigs who can overrule Jim and give them the business. Dan has to try and balance this make-or-break business trip with a troubled life at home: his wife (June Diane Raphael) wants to send their bullied son to private school while their daughter seems to be dishing out some bullying of her own. Meanwhile Tim and Mike have other things on their mind, mainly prostitutes, ecstacy and tequila slaps. Thrown into the mix is Bill (Nick Frost), Jim’s beleaguered underling who just wants to be noticed, particularly at the gay festival that’s happening in the city.

The film’s primary message is about acceptance and perseverance in the face of bullying: Dan’s kid is put down by bullies at school; Bill is continually mistreated by Jim; and Dan’s little company is being overpowered by Chuck’s corporate behemoth. But all of this, which is all overly schmaltzy and simplistic, doesn’t particularly mesh with the raunchier aspects of the comedy. There’s an abundance of nudity, dick jokes, comedy sex and hard partying scenes that feel like they’re part of a different – and actually much more enjoyable – film.

Not all of the jokes work – a running gag about Mike’s breakfast-related surname isn’t as funny as they think it is – but many do land, enough to give the film a pass for its comedy. Franco in particular delivers a brilliantly nice-but-dim performance, struggling with words, shapes and sexual positions in a sweetly dim-witted way; it’s a big change from his usual cocky frat boy routine. Wilkinson convinces as a man struggling with a loveless marriage who has got to the point in life where he just wants to let loose, so let loose he does, getting high on ecstasy with the group of young travellers he’s living with.

The disappointment in the cast is unfortunately its leading man. Unfinished Business is the latest in a line of syrupy, middle-of-the-road comedies that has seen Vaughn favour sentiment and sincerity over the kind of humour that he mined to such great effect in the likes of Swingers, Old School and Wedding Crashers. The motor-mouth, quipping smart-ass is still there but the edge is all but gone and every time he dips into the more mawkish side of the film, he just never convinces. He seems in this film – as he did in The Internship and The Delivery Man – like someone going through the motions. Maybe his upcoming role in True Detective will reignite his career but right now he seems stuck in a rut.

Ultimately, the film’s bullies = bad message is a noble one but Scott never really finds any insight into that particular topic and the maudlin tone of it grinds the film’s comedic momentum to a halt. Nonetheless, there are just enough laughs to ensure Unfinished Business is watchable, if not particularly memorable. 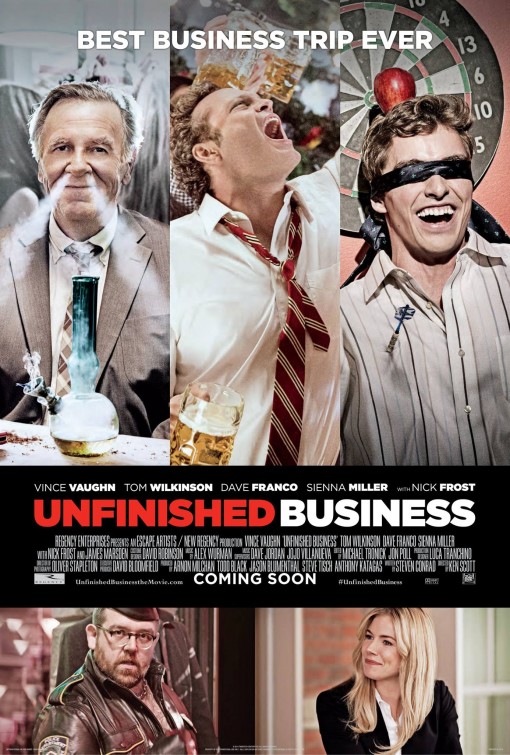