For 138 gripping minutes, Sebastian Schipper’s stunning fourth feature Victoria plays out in one continuous take, the camera following its titular protagonist and her new acquaintances through the streets of Berlin in the small hours of one particularly eventful morning. This is no gimmick or cheap trick either; this is a genuine unbroken shot with no concealed stitches – ala last year’s Best Picture winner Birdman – and it helps make this a unique, engrossing cinematic experience.

It should be noted that Victoria is a film better seen cold, without any knowledge of what transpires, particularly in its third act. This review doesn’t go into any specific detail but does give an outline of the plot, so if you haven’t seen Victoria yet, maybe come back later.

Victoria (Laia Costa) is a young Spanish girl alone in Berlin. While out clubbing one night, she runs into a group of rowdy young German guys: Sonne (Frederick Lau), Boxer (Franz Rogowski), Blinker (Burak Yigit) and Fuss (Max Mauff). These guys seem like they could be trouble but Victoria, desperately in need of some friends, tags along as they wander the empty early morning streets, snagging some beers and getting in a brief scuffle with another group.

Working from a very loose script – Schipper’s screenplay is reportedly only twenty pages long with no dialogue – the actors have to improvise everything here and they all have an easy chemistry, particularly Victoria and Sonne. A charming, slow-burn romance begins to develop between the two and much of the film’s first hour follows the couple as they get to know each other and their attraction grows, leading to a wonderfully romantic scene in a café where the sharing of some personal stories deepens their bond and Costa shows off some impressive piano playing skills.

This first hour of the film is utterly charming and completely absorbing, like Before Sunrise for Millennials. But there is the nagging feeling that something, somehow is going to go wrong. Much as we’ve warmed to Sonne and seen the soft side of his buddies, particularly the well-named Boxer who worries about being perceived as a bad guy because of his criminal past, there’s still that slight suspicion that these guys aren’t on the straight and narrow.

Sure enough, after sucking us in with such a sweet first act, Schipper turns the film on a dime and suddenly Victoria is playing getaway driver in a bank robbery plot brought on by one of Boxer’s prison acquaintances. The switch in genre could’ve been jarring but Shipper manages the transition perfectly and the single shot device ramps up the tension as it follows the group in car chases and shoot outs with the unwavering camera adding to the heightened tension. By the time it’s all said and done, it’s remarkable to see how far the characters have come in the space of two-and-a-bit hours, all of which we’ve seen play out in real time.

On a technical level, Victoria is astounding. Considering the number of locations used – from shops, clubs, cafes, carparks and even rooftops – and the logistics of the action scenes, it’s almost unbelievable that Schipper and his cast and crew managed to pull this off with only two takes before the one that ended up being the final film. At the centre of it all is a wonderful performance from Laia Costa, who anchors this entire film with a completely natural, engaging performance that shifts and adapts as the film changes gears numerous times.

The one shot style does have its drawbacks, mainly a few scenes of dialogue that run into dead ends that would otherwise have been cut sooner and that does lead to some scenes sagging. But that is a small criticism of an otherwise original, exhilarating piece of cinema and one of the year’s very best films. 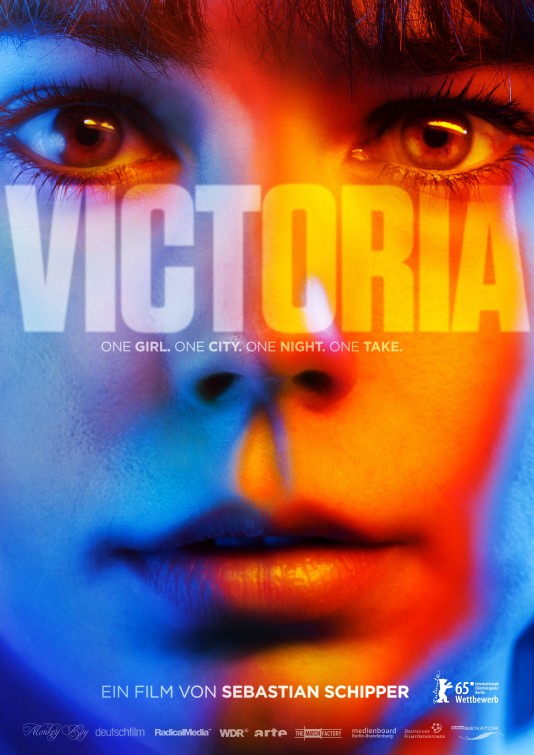