London has never looked as cool as it does in Eran Creevy’s Welcome to the Punch, a British cops-n’-robbers flick that refreshingly avoids the usual tropes of ‘gritty’ British crime thrillers and goes for an altogether slicker film that clearly harbours ambitions of being Britain’s answer to Heat or Infernal Affairs. This is the film that last year’s dismal Ray Winstone vehicle The Sweeney wanted to be.

The dream cast is headed up by James McAvoy and Mark Strong, who we first meet in a vigorous chase scene. Strong’s master criminal Jacob Sternwood has just pulled off another heist and McAvoy’s hot-headed young detective Max Lewinsky is in close pursuit, without backup. After a scuffle, Sternwood shoots Lewinsky in the knee and makes his getaway.

Three years later and the altercation has left Lewinsky with a brutal knee injury and a burning obsession with bringing down Sternwood, who is currently holed up in Iceland. Their game of cat and mouse is soon resumed however, when Sternwood’s son is caught up in a heist gone wrong and he is forced to return to London.

Lewinsky sees this as his big chance to finally get his man but in the process, he discovers that he and Sternwood have a common enemy and soon the pair are caught up in the middle of a conspiracy that transcends their bad blood.

Creevy has impressively dodged the pitfalls of most British crime movies and replicated the sleak, polished style of a big time Hollywood feature. This isn’t a grey, rain-soaked London populated by Cockney wideboys and low-rent crims, this is a sleak and glossy metropolis that looks more like Michael Mann’s LA than Guy Ritchie’s London. Creevy makes no bones about his influences – from Andrew Lau to Tony Scott – and never is it more obvious than his homage to John Woo, a show-stopping bullet-time sequence in a peculiar setting that gives it a very British twist.

In amidst the twisting plot and virtuoso style, Creevy falls a little bit short on character and dialogue, particularly earlier in the film where the fantastic cast are landed with a number of clunky lines and on-the-nose declarations. Andrea Riseborough suffers the most in a criminally underwritten role as Lewinsky’s partner.

Thankfully, the cast of experienced character actors filling out the smaller roles are able to paper over the cracks. Peter Mullan is fantastic as Sternwood’s loyal friend, Johnny Harris is suitably horrifying as dead-eyed mercenary Dean Warns and David Morrissey is on hand as a potentially duplicitous police lieutenant.

It’s McAvoy and Strong who have the plum roles though and both are impressive, with McAvoy playing somewhat against type as a loose-cannon and Strong is mesmerising as the charismatic and complex anti-hero.

Despite the lack of depth to the characters, Welcome to the Punch is still a compelling thriller with a fast moving plot and an excellent cast that elevates the material. If his writing occasionally falls short, there’s no denying Creevy’s directorial flair and ambition, seamlessly recreating a big-budget action picture on a relative shoe-string budget. Style over substance? Certainly, but what it lacks in weight, Welcome to the Punch more than makes up for in shear adrenalin. 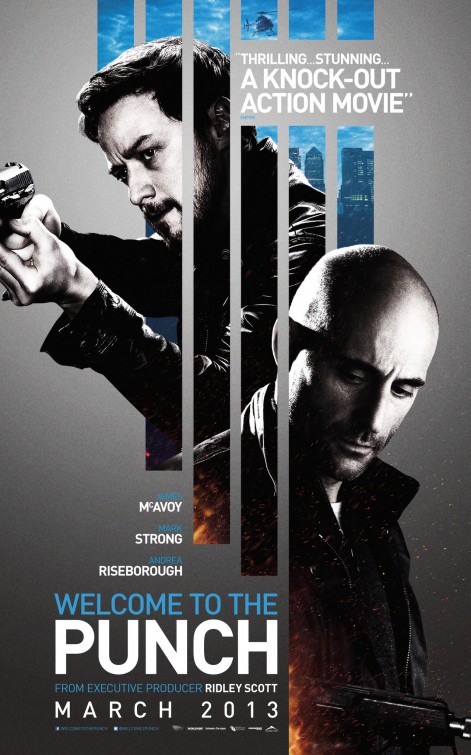