Damien Chazelle’s searing sophomore effort Whiplash manages to take the unlikely subject of jazz drumming and craft an impossibly exhilarating master-and-apprentice film that takes a thrilling, if occasionally implausible, look at the price of ambition, the drive for artistic perfection and the boundaries of a mentor/pupil relationship.

The pupil in question here is Andrew (Miles Teller), an aspiring jazz drummer in his first year at a fictional Juilliard-like music school in Manhattan. The film opens on Andrew, furiously honing his craft in a lonely practice room, with only a photo of Buddy Rich as an audience. That is until he is spotted by Fletcher (JK Simmons), the legendary jazz teacher and band leader, who fans the flames of Andrew’s already-smouldering ambition.

JK Simmons has been around for a long time, impressing in roles as disparate as that of neo-Nazi inmate Schillinger in HBO’s Oz or as the loving father of the title character in Juno, but never before has he had a role as juicy as that of Fletcher. He flits effortlessly between the encouraging father figure and vicious drill instructor as he tries to coax the best from everyone in his class, even if it means abusing and humiliating them along the way. With a shaved head and a never-ending line of black t-shirts that cling to his muscular torso, Fletcher is a fearsome creature and Simmons’ performance is captivating.

Going toe-to-toe with Simmons is no mean feat but Teller gives an equally impressive performance as a young man fuelled by a desire to be the next great jazz percussionist. Teller has had an up and down career so far, between impressing in smaller dramas like his debut Rabbit Hole and 2013’s The Spectacular Now, and adopting a mini-Vince Vaughn persona in studio comedies as egregious as That Awkward Moment and 21 & Over, but Whiplash is the 27-year-old at his very best.

Andrew is delighted to be invited into Fletcher’s band but during his first class, his inability to match Fletcher’s tempo results in a chair being hurled at his head before he receives a verbal dressing down for the ages, leaving him in tears. The boy’s weakness just spurs Fletcher on: “You’re not one of those single-tear people are you?”, he berates Andrew. From that point on, Andrew is desperate to prove to Fletcher that he can be one of the greats and will sacrifice just about anything to do it, including a blossoming relationship with Nicole (Melissa Benoist).

There are certain elements of Whiplash that are extremely unlikely, if not entirely implausible. Would Fletcher really have kept his job for so long after abusing students who are paying a fortune for the privilege? Probably not, but through the relationship between Fletcher and Andrew, Chazelle explores the acceptable limits of motivation between teacher and pupil and the toxic effects of a constant search for artistic greatness, a search which almost takes Andrew over the edge. The culmination of this battle of wills is an almost unbearably tense finale of blood, sweat and wild drumming, where the power shifts multiple times and it isn’t entirely clear who really has the upper hand. The ending makes us consider if Fletcher’s sadistic methods were actually worth it after all, and it’s clear how Chazelle feels about it.

As well as Chazelle’s energetic direction and the powerful performances of his leading men, Whiplash also boasts a jazz soundtrack to die for – old standards like Caravan and the titular Whiplash crop up throughout – and moody cinematography from Sharone Meir, adding up to a film that feels almost masterful on every level; an astonishing achievement for a filmmaker who only recently turned 30. 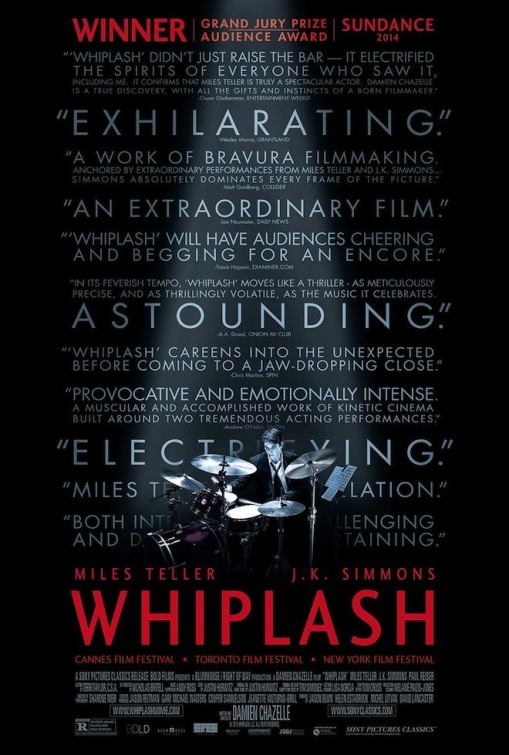