Wild Card marks the second time legendary screenwriter William Goldman has adapted his own novel Heat for the big screen. The first time was a 1980’s Burt Reynolds thriller; now it’s been repurposed as a vehicle for Jason Statham. Its origins aren’t surprising considering how much it feels like a film from a bygone era, a throwback to old school action flicks that crucially – like its leading man – never takes itself too seriously.

Statham stars as Nick Wild, a weary Vegas tough guy with a murky past and connections all over the city. One such connection is Holly (Dominik Garcia-Lorido), a beautiful young woman who has been raped and beaten by a two-bit mobster (Milo Ventimiglia) and his bodyguards, and wants Nick’s help to track them down and exact her revenge. Despite knowing it’s a bad idea, Nick’s sentimental side gets the better of him and he helps Holly, landing him on the wrong side of the mob.

The film then kind of forgets about that altercation for a while and focuses on Nick’s dream of getting out of Vegas for good. He plans to make enough money to live for five years – which is apparently half a million dollars – and running off to sail a yacht in Corsica. This is where we find out he’s also a skilled gambler and in the film’s stand out scene, he goes on an incredible run at a blackjack table in a scuzzy casino, earning enough money to fulfil his dream and then some, before realising that whatever he wins will never be enough and heading back to the table for more.

The plotting of Wild Card feels particularly odd: plotlines disappear and reappear whenever its most convenient; little things are set up and seemingly abandoned; and there are effective but brief roles for actors like Sofia Vergara, Jason Alexander, Anne Heche, Hope Davis and Stanley Tucci that never come to much. It’s like there was a bigger story here that’s been chopped down to make for a tighter film, which works in the sense that Wild Card is well-paced and doesn’t outstay its welcome, but it might have been nice to spend a bit more time with some of these characters.

As well as the muddled plotting, there never seems to be any real danger for Nick. It’s customary in Statham films for the grizzled cockney star to batter his way out of any situation but here it never once feels like the piles of mob goons who line up against him have even half a chance. The action is well-staged and cleverly choreographed – though sometimes let down by the use of needless slo-mo – but Nick despatches his foes with such consummate ease that you wonder why these people are bothering to attack him in the first place. The only time he gets beaten up is by his buddy Osgood (Max Cassella) as part of a ruse to impress his girlfriend (Vergara).

It isn’t just the physical confrontations that Nick has the upper hand. He is in control of every situation and is pally and jocular with everyone, from internet billionaire Cyrus (Michael Angarano) to friendly mob boss Baby (Tucci). It seems gambling is his only worthy adversary but even then he can kick its ass for long enough too.

Still, for all of its issues, Wild Card is a Jason Statham Movie and how much enjoyment you get from it likely depends on your tolerance for the follicly challenged Englishman and his particular brand of underplayed, no-nonsense acting. Despite a couple of rare forays into more ‘serious’ material lately, Statham seems to know where his skills lie and he has enough physical presence and tongue-in-cheek humour to make a film like Wild Card work. This is probably the most fun Statham film since 2012’s Safe and the star’s stiff charisma carries it through its uneven plot and lack of tension. 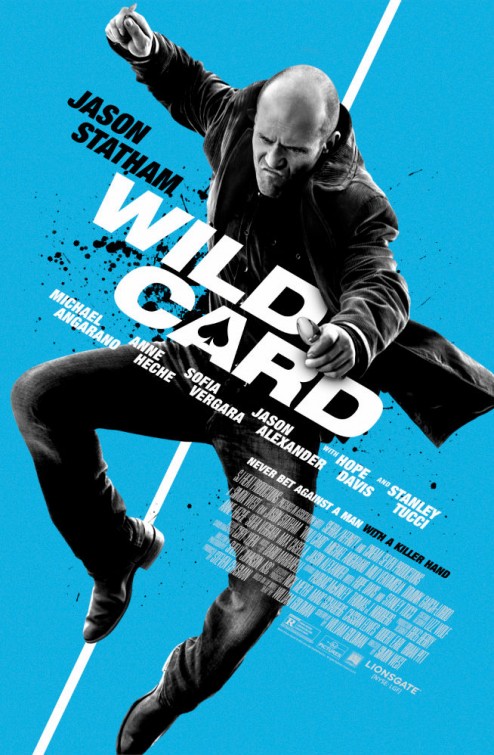