After his X-Men and X2 helped kickstart the superhero movie boom back in the early 2000’s, director Bryan Singer has returned to the franchise that has had its ups and downs since his departure. Directors have come and gone and multiple sequels and prequels have muddied the waters of continuity, leaving the series in the tricky spot of having to decide what to do with the original cast, as well as the younger versions introduced in Matthew Vaughn’s prequel/reboot X-Men: First Class.

Luckily, the perfect story is right there in the X-Men back catalogue: Days of Future Past. With a few tweaks to that classic time travel arc, Singer and screenwriter Simon Kinberg are able to use both the old cast and the new, as well as pick and choose the elements of the franchise that they want to remain canon. This all makes the continuity of the series a massive tangle that’s almost impossible to really get to grips with but by the end of it, there’s a slightly tidier starting point for any films that will follow.

The film begins in a dystopian future where mutants and are being hunted down and slaughtered by giant robots named Sentinels. Leading the resistance against the machines are the remaining X-Men, lead by Professor Xavier (Patrick Stewart), Magneto (Ian McKellen) and Wolverine (Hugh Jackman). The only hope is to send someone back in time to stop the chain of events that lead to the development of the Sentinel programme.

With the aid of Kitty Pryde (Ellen Page), the group manages to send the conscious of Wolverine – the only mutant strong enough to withstand the journey – back into the body of his 1970’s self. In order to prevent the tragic future that awaits, Wolverine has to find the young, drug-dependent Xavier (James McAvoy) and snap him out of his funk while also springing Magneto (Michael Fassbender) out of a prison beneath the Pentagon and tracking down elusive shapeshifter Mystique (Jennifer Lawrence), who will play a crucial role in the rise of the Sentinels.

Along for the ride are Beast (Nicholas Hoult) and Quicksilver (Evan Peters), a teenager with the necessary abilities to orchestrate the jailbreak in the film’s standout scene and probably the best thing Singer has done since X2’s stunning Nightcrawler opening.

Singer has been on a bit of a wayward path since leaving the X franchise to helm Superman Returns, with films like Valkyrie and Jack the Giant Slayer largely falling flat, not to mention his recent public scandals. But Days of Future Past marks a strong comeback for the director and the fact he’s managed to pull it off at all is something of a minor miracle. The film deftly straddles the line between the heavy, Dark Knight-inspired comic book films and Marvel’s primary coloured, one-liner-filled superhero flicks, mixing wit and humour with some weighty themes that tie into easily recognisable real world scenarios.

The film also finds a good balance between character and spectacle, with stakes that are astronomical but still anchored by well-drawn characters. There are many impressive set-pieces – including Magneto moving an entire football stadium across a city – but everything is character driven and the action never descends into the senseless, non-descript mass destruction that has become all too familiar in blockbusters. Even the finale goes for an emotional payoff rather than an explosive one.

Key to this approach is the cast, which is surely up there with the most impressive ever assembled for a summer tentpole. While the older cast are mainly resigned to glorified cameos, the younger cast are allowed to shine once again. If First Class belonged to Fassbender’s icy rage, Days of Future Past is McAvoy’s chance to steal the show and he does so with a damaged, angry and self-pitying turn that gives a whole new spin on the Xavier that we know so well.

Elsewhere, Jennifer Lawrence is suitably reliable as Mystique and Peter Dinklage brings a lot of charisma to the role of Boliver Trask, the man behind the Sentinels, but both are treated more as plot devices than actual characters. There are numerous other mutants, many of them not even named at any point, but we get to know them through their powers as part of impressive, ensemble fight scenes.

The continuity is hard to wrap the head around and some characters motivations are muddy, but nonetheless, Days of Future Past is a smart, fun entertainment that builds excellently on the promise of First Class, providing an excellent launching pad for a franchise that was in danger of becoming lost amongst the slew of superhero movies that it helped pave the way for. 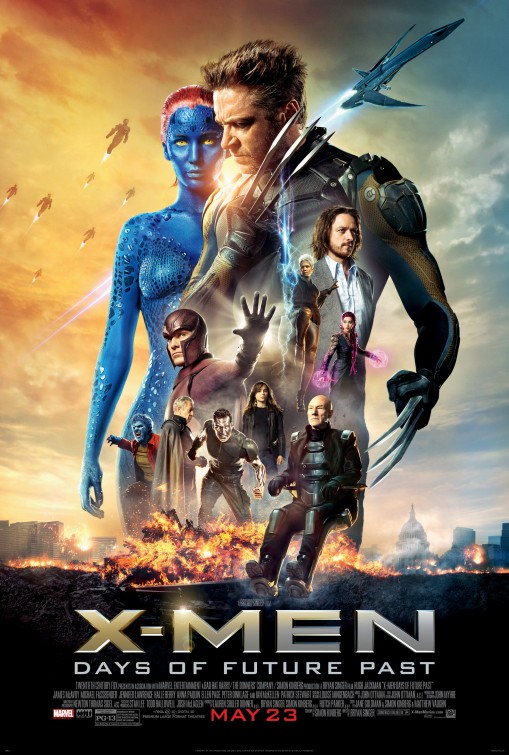