Who would’ve thought it’d be the mumblecore movement that would breathe new life into the horror genre? Adam Wingard’s excellent home invasion thriller You’re Next is the latest in a growing line of intriguing horror films from the group of filmmakers behind the ‘mumblegore’ scene that has so far produced some intriguing fare, including horror anthologies V/H/S and The ABC’s of Death.

The scene is set for a suitably awkward family reunion, with tensions already rising and the bickering in full flow. That is until the first arrow comes crashing through the window, embedding itself deep in poor Tariq’s skull and panic quickly sets in as it’s clear the Davisons are under attack from a group of assailants disguised in creepy animal masks. Finding the right mask is essential to this kind of film. It has to be as expressionless as possible but also have a hint of innocence to juxtapose the atrocities the wearer is about to commit. The plastic animal masks here have all that in spades, while also being absurd enough to raise a smirk now and then.

What the attackers didn’t count on was feisty Aussie Erin, who isn’t going to let the rest of the family be picked off one-by-one without a fight. She goes about rigging the house with a series of grisly booby-traps in a horrific throwback to Home Alone, helping her despatch the invaders in some pleasingly gruesome ways, including the most inventive use of a kitchen appliance in recent memory.

While the plot is loaded with clichés, You’re Next does a good job of subverting as many of them as possible and the result is a witty dark comedy that plays with genre tropes without ever seeming too pleased with itself, like last year’s overblown Cabin in the Woods. The humour is dry and often so deadpan that many will miss it and take this as a straight horror, but it’s clear Wingard has his tongue in cheek as he gleefully splatters the middle-class mansion with buckets of blood. The continual bickering and one-upsmanship amongst the family, even in life or death situations, will ring true for anyone with a brother or sister.

That’s not to say it isn’t an unsettling film though and the prospect of strangers laying waste to you and your family in your own house is a concept that the slasher genre keeps coming back to, and for good reason. Being targeted by masked maniacs is a frightening thought, especially with no idea of why you’ve been chosen for such punishment. While that’s a potent set-up, it’s also the area where the film eventually falls down, choosing to explain the motive behind the invasion which is a fun twist but robs the film of a lot of what made it terrifying in the first half. Once you know that this isn’t a random attack and that the family has been chosen for a reason, it loses part of its universal appeal.

While that reveal, as well as the slightly ridiculous reasoning behind Erin’s incredible survival skills, slightly dampen the experience, You’re Next is ultimately a smart, funny and satisfying crowd-pleaser that provides a strong heroine for the audience to really get behind. It doesn’t do anything new per se, but certainly puts a charming twist on a well-worn format, announcing the talented Wingard on a more mainstream stage. 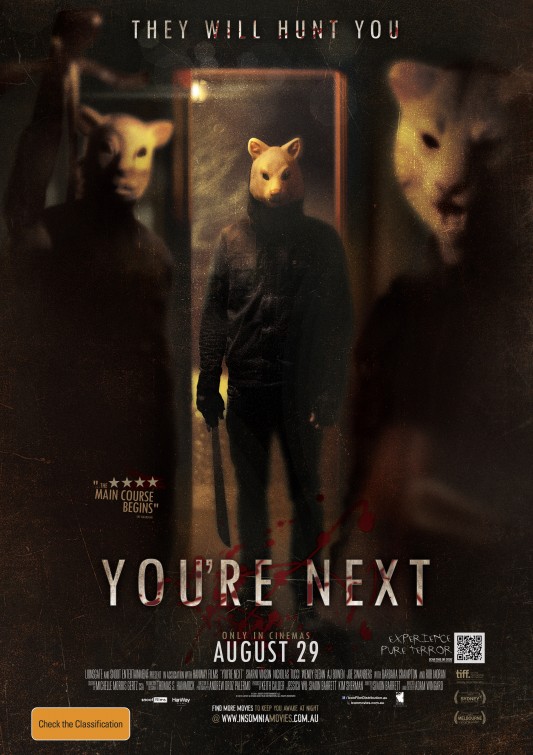